Full servo forging press for GKN, a new step towards the technological forefront Maximum flexibility thanks to the ability to configure the slide movement curves adapted to each piece to be forged.

The possibilities for maximizing productivity and flexibility offered by servo technology are opening up in the forging industry. GKN has taken another step towards state-of-the-art engineering with the commissioning of its first servo press for forging in Europe, at its plant in Trier (Germany), supplied by Fagor Arrasate.

In the recent history of forming presses, there are numerous milestones in which Fagor Arrasate has been a pioneer in the application of new technologies that have subsequently been used extensively in the market. Some examples are the first double-acting CNC hydraulic cushion, the first servo press developed in Europe in 2005 or the first servo ejector system for forging in 2007.

The installation we are talking about on this occasion is another example of innovative technology implemented in the world of presses. This project delivered to the German GKN plant in 2018 is one of the first servo presses for forging. It is also most probably the first press in full servo production with servo-main drive, transfer and ejectors, both on the table and in the slide. This means that the curves of all press axes can be freely programmed from a computer or from the machine’s main control panel – a fact that process engineers greatly appreciate and that was unimaginable just a few years ago.

Compared to a similar conventional press, where the speed of the drives cannot be adjusted during a single cycle, the acceleration capability of servo drives offers the possibility to optimize the movement of the individual axes and synchronize them in such a way that the speeds of each axis are optimal for each moment of the cycle.

In this way, if, for example, the forming speed is limited by the process, the servo press can brake during forming and accelerate after forming. This same logic can be applied to any limitation or bottleneck (transfer, ejection, lubrication, etc.) that occurs during the process. The in-cycle acceleration and synchronization capability offered by the full servo press results in reduced cycle time and increased flexibility in any process where there is a bottleneck. This translates into higher productivity on regular pieces and greater adaptability on new pieces.

Graph showing the displacements of the slide and the 2 ejectors.

Although Fagor has already manufactured 30,000 kN servo presses and can integrate servo technology in almost any tonnage and type of kinematic chain in its press catalog (eccentric, link drive or knuckle joint), the GKN press has a knuckle joint press architecture with a nominal tonnage of 600 tons.

In any case, the robustness of the design, characteristic of Fagor forging presses, makes one think of a press with a higher tonnage. A clear indicator of the robustness of this press is, in addition to its height and tie-rod construction, its high rated tonnage application point of up to 22.5 mm over the Bottom Dead Center. The long slide adjustment (130 mm), specifically required by the customer and whose assembly is located in the headstock, also makes the press particularly high for its tonnage.

Another peculiarity of this machine, contrary to the usual market practice, is that the machine has been designed with sufficient power and robustness to deliver the 600 tons of force at maximum speed (50 spm) above the 12 mm height over the BDC (Bottom Dead Center). It is important to note that in servo driven machines (unlike conventional flywheel machines where the point of application is constant over the entire speed range) the height at which the rated tonnage is applied depends on the speed of the machine and that the higher the speed, the lower the height at which the force is applied.

This is due to the fact that the force exerted by the press depends directly on the torque curve of the main motor, a circumstance which means that, on many occasions (in very fast presses or presses with little power in the main drive), at maximum speed, they have a very low application point. It is therefore vital for the manufacturer to know what the machine is going to be used for and whether the customer is planning to use it at maximum speed and load. In these cases, the unique calculation and adaptation capacity offered by Fagor in the design phase allows each project to be optimized to the needs of each customer. GKN Automotive has named Fagor Arrasate as Supplier of the Year in the CAPEX category. This award recognises the outstanding performance of our company to quickly develop a new forging press with various extended features, including a strong commitment to deliver it in the short project timeline. The company also highlighted our support to GKN’s overall business requirements. The GKN Suppliers Conference took place on October 6 and gathered online nearly 300 suppliers, who where presented the company’s future strategy. Fagor Arrasate was one of the 8 suppliers awarded at the event. SOLUTIONS FOR THE FORGING SECTOR

We specialise in forging systems that integrate the press and the transfer, resulting in fast, robust and reliable installations for cold, warm and hot forging. 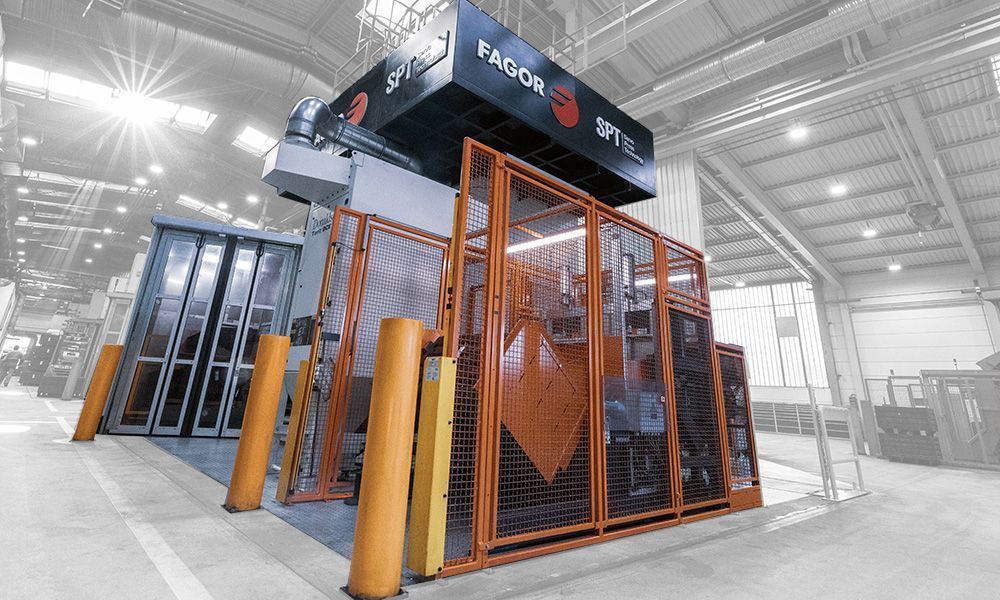 With FAGOR Full Servo concept in Forging, a new level of control and flexibility is available.

SOLUTIONS FOR THE FORGING SECTOR

We specialise in forging systems that integrate the press and the transfer, resulting in fast, robust and reliable installations for cold, warm and hot forging.

With FAGOR Full Servo concept in Forging, a new level of control and flexibility is available.

Necessary Always Enabled
Necessary cookies are absolutely essential for the website to function properly. This category only includes cookies that ensures basic functionalities and security features of the website. These cookies do not store any personal information.
Analytics
It enables to check users’ preferences and further analyzing in order to improve and develop products and services. Gathering information is anonymous and occurs without personal data identification of particular user.
Media Player
For video playback, this page uses third party platforms such as YouTube and Vimeo, among others, to conveniently serve videos. This Cookie is required to play video or audio. As a result, when you visit a page with embedded content, cookies may be installed from those websites.  Fagor Arrasate does not exercise any control or responsibility over these cookies, so you should check the corresponding cookie policy of these third parties if you wish to obtain more information.
Social
Social cookies are necessary for external social networks, for example, LinkedIn. Their function is to control interaction with social widgets within the site.
Marketing
Marketing cookies are used to provide visitors with relevant ads and marketing campaigns. These cookies track visitors across websites and collect information to provide customized ads.
Others
Other uncategorized cookies are those that are being analyzed and have not been classified into a category as yet.
Save & Accept