The SEAT plant in Barcelona’s Zona Franca has taken a great leap forward in its production thanks to the Servo Hybrid WaveLine installed by Fagor Arrasate. It is the first of its type in Europe within high-speed press lines. With up to 15 strokes per minute, synchronisation for working in continuous mode, hybrid configuration and digital simulator on a Siemens PLS platform, it is one of the most advanced lines in the world in its category. A high-performance and advanced technology line that allows the VW group company to stamp large steel body parts at high production rates.

It is a line with a servo-driven mechanical lead-off press and another 5 conventional mechanical presses that obtain similar results to those of a full servo line, but with a better return on the investment.

The installation of a line of these characteristics and for such a prestigious OEM is a new step forward for Fagor Arrasate in the high-speed market due to the requirement level and the level of satisfaction achieved. In fact, it has awoken great interest in potential customers who have asked to be able to visit the installations.

SEAT has put its trust in Fagor Arrasate for such an innovative installation due to their long experience of working together since 1977, with more than 15 installations purchased and an extensive service collaboration.

At the time of choosing an offer, SEAT assessed Fagor Arrasate’s flexibility and adaptation capability to carry out a customer’s tailored project. In the case of the Barcelona WaveLine, SEAT’s know-how was included to achieve specific solutions to their challenges and needs.

The WaveLines are Fagor Arrasate’s response to growing market demand for high-speed press lines. In 2010, it took its first order for VW South Africa, which resulted in its first WaveLine. The name is derived from the similarity of the slide motions during the continuously working stamping process (without stop-start) with the movement of a wave.

The project was carried out with the collaboration of Güdel, a Swiss company that leads the world in press automation. It is the company with the most experience, development capability and orders in high-speed press line automation, with more than 100 in production. This partnership means the presses are equipped with the fastest part transfer system on the market, the roboSpeed. This is the first European line with this equipment. In view of the good results obtained from this partnership, the collaboration will continue in future projects. Notable among which is a line that will be installed in Poland.

The main characteristic of the SEAT WaveLine is its hybrid configuration: it has a servo-driven lead-off press with hydraulic cushion and five conventional mechanical presses with pneumatic cushions on the slide. All these are equipped with a Linkdrive type kinematic chain. The total pressing force of this line is 81,000 kN shared between the servo press with 21,000 kN and the other five with 12,000 kN each.

The fact that the lead-off press is servo-driven allows the speed of the slide to be varied at any point of its travel. This makes it possible to open the die more quickly to allow the roboSpeeds to unload and load a part as quickly as possible and reduce the speed again on closing the die. In this way, the speed is adapted to the needs of the forming process of the part to be stamped.

The kinematics of this press are driven by 4 Siemens 1FW3 (4×380 kW) motors, and an energy management system made up of another 3 Siemens 1PH8 motors, which allow the recovery and storage of energy and its release during the working cycle phase in which this is necessary.

The 6 presses have been designed with a stroke (1300 mm) and Linkdrive type kinematics to facilitate the entry and exit of the roboSpeeds to and from the die area for the transfer of the parts, which optimises the cycle times. The combination of these technologies allows the line to work in a continuous cycle with total synchronisation of the presses, with carbon fibre reinforced composites, with the transfer system and at very high work rate of up to 15 spm.

Another notable feature of the lead-off press is that it is equipped with an 8 point hydraulic cushion, with a 350 mm useful stroke and 6000 kN of programmable force during drawing. Furthermore, with the aim of reducing the sharp shock that occurs when the slide impacts with the cushion, and to prevent damaging vibrations both to the part and to the press, it offers the option of carrying out a controlled lowering or preacceleration. This is an ECO-efficient cushion with two HP/LP circuits that optimise the operation with lower energy consumption than a conventional hydraulic cushion, with a 45% lower cost.

Furthermore, all the presses are equipped with two die holder moving bolsters and automatic die clamps. This, in combination with the Güdel tool holder slides, allows the die and the roboSpeed transfer grippers to be changed fully automatically and very quickly. Specifically, part change times from the last to the first part produced of under five minutes are achieved.

The transfer system is divided into 3 parts:

The FOL (destacker system or blank loader) alternatively receives two loading carriages with stacks of blanks that are raised independently to the feeder collection position. By means of the feeder and the magnetic belt system, the installation is capable of transferring the blanks from these stacks, which pass through the cleaning system and the lubricator up to the centring unit. Then, they are taken to the first press at working speed. Working with two blank stacks allows changing from one stack to another without having to stop production of the line.

The inter-press transfer system, for its part, is made up of 7 roboSpeeds that, located at the press inputs and outputs, feed and remove the blanks in synchronisation with the presses. They receive the position signals fromeach one of the presses, which improves the response times of the system. This, together with the presses, is what allows the high production speeds of the WaveLine to be achieved.

The EOL, in turn, is made up of a shuttle onto which the last roboSpeed unloads the completed parts. The shuttle transports them to the unloading feeder collection area, which rotates them and positions them on the output belts, from which they are collected by the operators.

Another of the innovative characteristics of the line is the digital simulator on a PLS (Siemens) platform. This system simulates the machine cycle. Once the appropriate lead-off press curve has been defined for the parts to be manufactured, the automated trajectories and speeds are programmed. Thus the work cycle can be optimised off-line, and then the resultsof the simulation obtained loaded into the installation and these curves executed on the presses.

This is a very important tool for the design and manufacture of new dies. This is because it allows the setting time of these dies in the installation to be reduced and optimal work rates to be obtained. I would highlight the flexibility in project management, with the capability to adapt to the needs of the customer or the project

What are your main requirements?

What advantages are there in the products and services of Fagor Arrasate?

What made you decide on

What part of the project management stands out?

I would highlight the flexibility in project management, with the capability to adapt to the needs of the customer or the project.

What components are you making with the Fagor Arrasate installation? 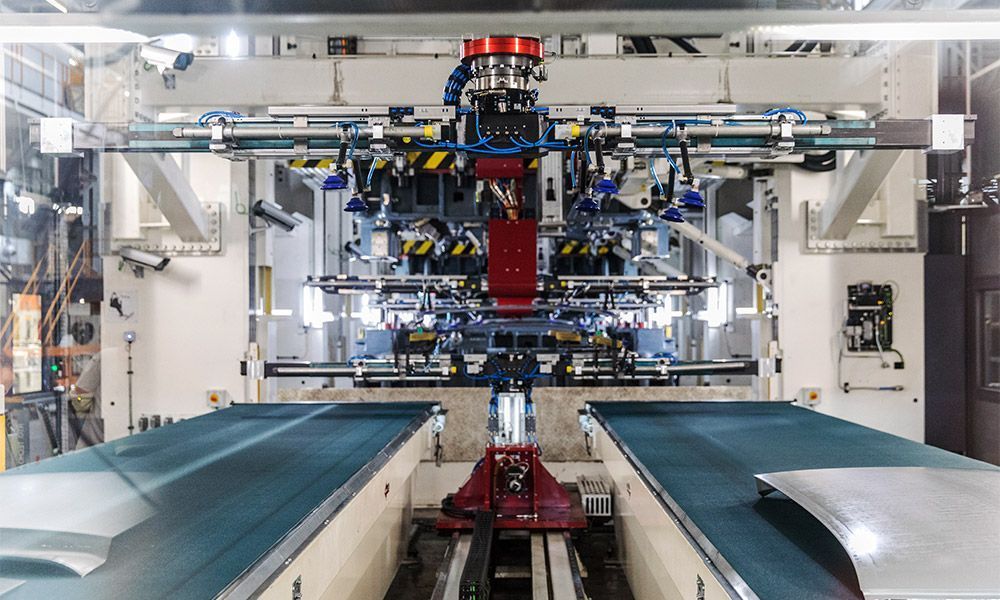 Necessary Always Enabled
Necessary cookies are absolutely essential for the website to function properly. This category only includes cookies that ensures basic functionalities and security features of the website. These cookies do not store any personal information.
Analytics
It enables to check users’ preferences and further analyzing in order to improve and develop products and services. Gathering information is anonymous and occurs without personal data identification of particular user.
Media Player
For video playback, this page uses third party platforms such as YouTube and Vimeo, among others, to conveniently serve videos. This Cookie is required to play video or audio. As a result, when you visit a page with embedded content, cookies may be installed from those websites.  Fagor Arrasate does not exercise any control or responsibility over these cookies, so you should check the corresponding cookie policy of these third parties if you wish to obtain more information.
Social
Social cookies are necessary for external social networks, for example, LinkedIn. Their function is to control interaction with social widgets within the site.
Marketing
Marketing cookies are used to provide visitors with relevant ads and marketing campaigns. These cookies track visitors across websites and collect information to provide customized ads.
Functional
Functional cookies help to perform certain functionalities like sharing the content of the website on social media platforms, collect feedbacks, and other third-party features.
Save & Accept