The latest of the new installations is equipped with two roller ovens in parallel and will be the first of its kind at Volkswagen Group designed to carry out completely automatic and independent racking of three parts. The line will be delivered to the Kassel plant, Volkswagen Group’s key facility for hot stamping. In fact, it has the highest concentration of hot stamping lines in the world with a total of 12 after the new acquisitions.

All this expertise places Fagor Arrasate in an unbeatable position to consolidate itself as a leader within the hot stamping industry, a market which is expanding thanks to the progressive redesign of the new vehicle platforms. New requirements in emissions regulations and the need to lighten the chassis of electric cars make this technology the fastest growing in the stamping sector.

It has three loading feeders and a powerful drive system for controlling the die. This new equipment enables each blank coming out of the furnace to be moved independently to the die instead of in groups.

This makes it possible for the furnaces to be smaller in size, given that after leaving the oven the pieces are separated to be stamped correctly. Thanks to this automation and the highly powerful hydraulic unit, the press is able to reach very high processing speeds.

The car manufacturer has trusted Fagor Arrasate for this project after the positive results of the two hot stamping lines installed in another of its plants. These lines are fully automated, both in the loading of forms and in the stacking of the pieces, and also have 2 parallel ovens for heating formats. For loading the press, they have a Fagor LR3-120 feeder that allows the hot formats to be transported quickly to the die, thus guaranteeing the quality and stability of the process.

The pieces, once stamped, are automatically placed in the stacking containers by a shuttle and 3 Kuka robots, so the process is completed entirely automatically. It also has an additional output belt for quality inspection of the pieces.

The first of these lines was acquired in 2017, when the Volkswagen Group started a hot stamping line renovation process, starting with the SEAT plant in Zona Franca, Barcelona. Fagor Arrasate obtained this first order with a fully automated line both in the loading of blanks and in the stacking of parts.

Satisfied with the confidence of Fagor’s design team, the Volkswagen Group awarded Fagor Arrasate a second line of similar characteristics for the same SEAT plant at the beginning of 2018. The new line incorporates improvements identified during the design process, and the functionality for obtaining parts with soft-zones. With this new installation, the Barcelona plant became one of the leaders in hot stamping technology.

The endorsement received from earning the confidence of a manufacturer of this size, along with its significant experience in its own automation systems, provides Fagor Arrasate with the potential for major growth in the hot stamping industry. The company has a thorough knowledge of transfer and feeding systems, including milestones such as the installation of the first mechanical servo press in Europe. 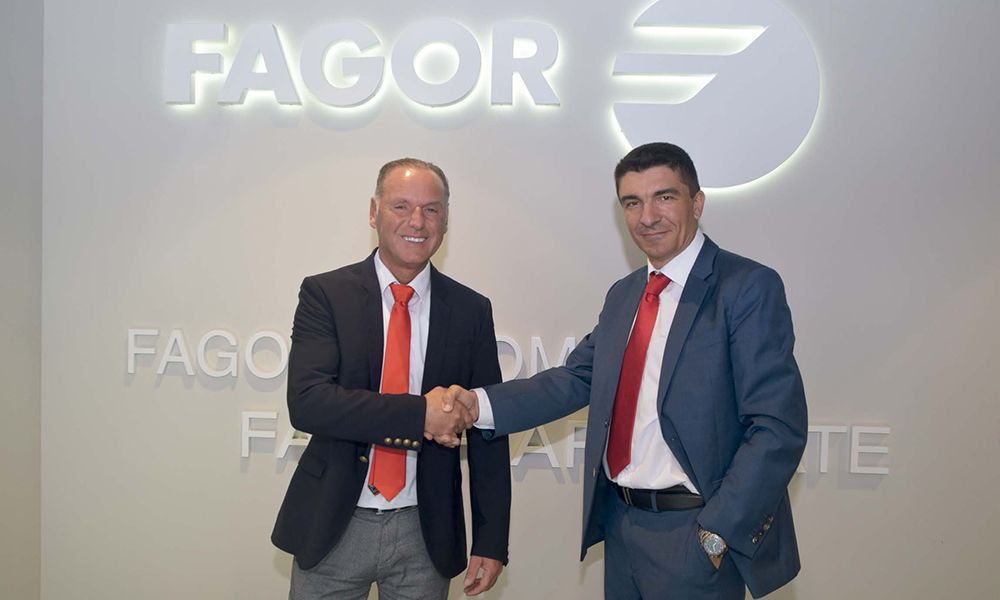 I have been in the automotive industry for 29 years, and involved in the installation of many Press Hardening lines and the global business of the industry over the past 16 years. It is not just about the press; you have to see the whole process you need to have the knowledge and experience from production to offer the customer a profitable and customer accurate press hardening line. We at Fagor Arrasate have the experience and knowledge to succeed with our customers. We design and manufacture complete hot stamping systems, including all the necessary peripherals to provide the presses with integrated and automated systems, as well as software programs to optimize the production systems.

We design and manufacture complete hot stamping systems, including all the necessary peripherals to provide the presses with integrated and automated systems, as well as software programs to optimize the production systems.

Necessary Always Enabled
Necessary cookies are absolutely essential for the website to function properly. This category only includes cookies that ensures basic functionalities and security features of the website. These cookies do not store any personal information.
Analytics
It enables to check users’ preferences and further analyzing in order to improve and develop products and services. Gathering information is anonymous and occurs without personal data identification of particular user.
Media Player
For video playback, this page uses third party platforms such as YouTube and Vimeo, among others, to conveniently serve videos. This Cookie is required to play video or audio. As a result, when you visit a page with embedded content, cookies may be installed from those websites.  Fagor Arrasate does not exercise any control or responsibility over these cookies, so you should check the corresponding cookie policy of these third parties if you wish to obtain more information.
Social
Social cookies are necessary for external social networks, for example, LinkedIn. Their function is to control interaction with social widgets within the site.
Marketing
Marketing cookies are used to provide visitors with relevant ads and marketing campaigns. These cookies track visitors across websites and collect information to provide customized ads.
Functional
Functional cookies help to perform certain functionalities like sharing the content of the website on social media platforms, collect feedbacks, and other third-party features.
Save & Accept